The Chameleon is an international terrorist and hitman. He has the ability to change his voice and appearance to copy anyone.

He is the stepson of the infamous Red Skull.

He was hired to attack a group in the United Nations, though was stopped thanks to Spider-Man and S.H.I.E.L.D..

He later was recruited by the Kingpin for the Insidious Six, though they were defeated. 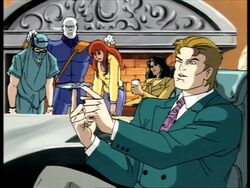 He helped Richard Fisk frame Peter Parker but was stopped by Spider-Man and Daredevil.

He was genetically altered so he did not need the belt and helped Kingpin kidnap The Cat from S.H.I.E.L.D.

Chameleon rejoined the Insidious Six to help find Red Skull's doomsday weapon. He actually plotted against the team with his stepbrother to release their father. They succeeded but also released Captain America. Spider-Man and Captain America fought his brother, turned supervillain, and Chameleon was arrested.

Chameleon has no credited voice actor as he usually only talked by transforming into someone else. He said a sentence once but no actor was credited, implying that he can talk but chooses not to. His grunts were provided by Jim Cummings.

His white face appears to be his normal face, whereas in the comics it is simply a mask he wears to help him change masks quickly.

The ability to change on his own, without a belt, was created for the series but adapted into the comics.

He is a Russian and the half-brother to Kraven the Hunter, who he apparently has no connection with on Spider-Man, and is unrelated to Red Skull, who is German, or Electro, who is American.

His real name is Dmitri Smerdyakov.

He originally used make-up and masks to change appearances. He then used a memory mask along with gases to change. It was Spencer Smythe who created the holographic belt.

He figured out Spider-Man's identity but lost that memory.