Chaffy is from the Non MAU "Pryde of the X-Men" episode.

Chaffy was a military colonel who had taken a decisively anti-mutant stance. He would also smoke cigars.

Chaffy was assigned to lead the convoy that carried the murdering mutant leader Magneto in a special holding cell through the desert. While carrying the prisoner he openly showed his disgust for not just Magneto but for all mutants.

While the convoy was traveling through the desert Magneto tried to escape but despite his best efforts he could not. Suddenly the truck he was held in swerved knocking Colonel Chaffy and a scientist off their feet. 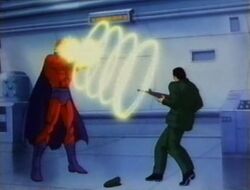 Apparently the convoy was sinking into the ground. The White Queen was using her telepathy to make the soldiers think they were sinking in quick sand and they all abandoned their vehicles. She then made a psychic spear and disrupted the power in the truck, releasing Magneto. Magneto then took Chaffy's gun and broke it apart.

He then threw Chaffy into a canal. When a soldier asked if he was alright Chaffy lamented that with Magneto loose no one was safe.

Chaffy was played by Alan Oppenheimer.

An original character to the episode.

Chaffy does something rare in an animation show targeted towards children, he smokes.

Retrieved from "https://marvelanimated.fandom.com/wiki/Chaffy_(Pryde_of_the_X-Men)?oldid=46551"
Community content is available under CC-BY-SA unless otherwise noted.