While traveling on the John Jameson Space Probe, the Venom Symbiote spawned an offspring. Dormammu got his assistant Baron Mordo to divert the rocket so that it would crash on Earth returning the two symbiotes. Upon their arrival on the planet, the two symbiotes attach themselves to a nearby couple. 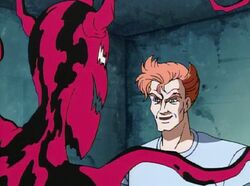 Disguised as the young man and under the control of Mordo, the second symbiote entered into Ravencroft Institute for the Criminally Insane after the escape of the newly reformed Venom. The symbiote then removed itself from the anonymous man and joined with recently incarcerated Cletus Kasady to form Carnage, much to Kasady's joy.

Carnage then goes to the Stark Industries demonstration to assist his "father" in stealing dimensional portal technology. While Venom becomes distracted, Carnage is able to defeat both Spider-Man and War Machine.

After bringing the dimensional technology to Mordo, Venom and Carnage restart their fight. Dormammu stops the fight and tells the two that he, in order to enter their world, they need an equal amount of life energy to put in his world to replace him. Venom refuses and leaves. Dormammu lets him go since Carnage will be sufficient for this new assignment. 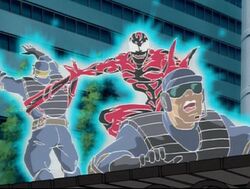 Madame Web then shows Spider-Man that Kasady is waiting for a "mutual acquaintance" and reminds him to "keep your friends close and your enemies closer." Detective Terri Lee comes home to find Kasady, now Carnage, waiting for her. Carnage attacks the detective and Spider-Man swings in to stop him. Dr. Kafka receives a call that Kasady's been spotted. Dr. Conners warns her to stay put but she must since Kasady is also her patient. When Carnage gains the upper hand over Spider-Man, Detective Lee tries to stop him but gets her life energy absorbed. Spider-Man tackles Carnage and the two go off the room and Carnage takes the brunt of the fall. Dr. Kafka arrives and Carnage takes her life energy since it is the last one he needs and escapes while kidnapping her.

The urn is now full and the portal to Dormammu's dimension is open. Spider-Man, having teamed up with Iron Man and Venom, arrive before Carnage can release the urn into the portal. Carnage distracts Venom with Dr. Kafka and opens the urn releasing Dormammu. Knowing how drastically overpowered the three heroes are, Spider-Man hatches a plan requiring that Venom and Iron Man hold off the three villains without him.

Spider-Man reverses the polarity of the probe and sucks Dormammu back to where he came from. As Dormammu gets sucked back, the life energy he took is released into each person, such as Detective Lee and Dr. Kafka. Dr. Kafka awakes and thanks Eddie for saving her, but now the symbiote is taking over again and becomes Venom. Dormammu fully reenters the portal but Spider-Man is unable to shut down the probe. Dormammu created some kind of link between he and Carnage that won't break therefore keeping the portal open. Venom throws Carnage into the portal but Carnage quickly grabs Dr. Kafka in an act of revenge against Venom. Venom saves her by sacrificing himself to stop Carnage. 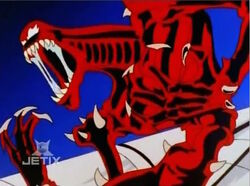 At some point, both Carnage and Venom escape Dormammu's dimension and team up. The two also gain new abilities and the desire to control everyone. Carnage and Venom board the John Jameson's shuttle to Counter-Earth despite Spider-Man's efforts. While there, the two attempt to take over Counter-Earth with an invasion of symbiotes. Spider-Man then travels to Counter-Earth and joins a band of freedom fighters to fight the High Evolutionary, along with the occasional battle with Venom and Carnage. 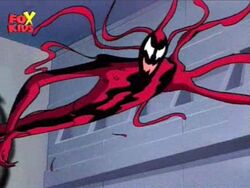 A proposed sixth season of Spider-Man would have seen Spider-Man going England to find the lost Mary Jane Watson. Meanwhile, Carnage would be there and have become Jack the Ripper. However the series ended and no sixth season was ever made. Though if it were made would contradict X-Men where Jack the Ripper was revealed as a creation of Mister Sinister. In John Semper, Jr.'s "fan fiction" script titled "Peter Finds Mary Jane", this story would have taken place in an alternate universe thus not contradicting X-Men.

In a proposed storyline for the unmade second season, Carnage and Venom would merge once again, after "One is the Loneliest Number", into a creature called King Carnage.[1]