Captain America, nicknamed Cap, is the codename of Steve Rogers, a volunteer of the super soldier serum created by the United States of America to aide them during the Second World War where he led the Six American Warriors. One of the most iconic heroes of the century, he eventually made his way to modern times and became a prolific superhero and leader of the Avengers. He is one of the most well known members of the team along with Iron Man and Thor.

Created during World War II as the Allies' Super Soldier, Steve Rogers was the first to volunteer for the top-secret experiment. Giving him increased strength, speed, reflexes and an unbreakable shield the experiment was a great success. 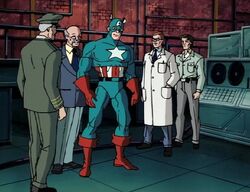 Unfortunately, when spies infiltrated the test, they destroyed the lab and killed the scientists who developed the formula, taking its secrets with them to the grave.

As no one knew the correct formula, scientists took educated guesses and created an artificial one in its place. Due to chemical shortages, only another 5 super soldiers could be created. Calling themselves the Six American Warriors, they began to fight The Red Skull, one of the Nazi’s most powerful agents.

Captain America acted as Logan’s “back up” during a mission to rescue a kidnapped American scientist from a ruthless nazi named The Red Skull.

Captain America and Logan infiltrated a Nazi castle but were taken captive themselves after the scientist who they were attempting to save turned traitor and alerted the guards to their presence.

Cap and Logan escaped, and defeated several Nazi agents and helped stop production of one of their deadliest projects, The Sleeper. Although they made a great team, Logan considered the mission a failure, and spent 50 years hating the scientist who turned them in. He later learned that the Scientist was acting as a double agent, and was sharing confidential Nazi information with the Allies.

Upon stumbling on The Skull’s evilest plot; both Captain America and The Red Skull were trapped inside a vortex.

With The Skull’s son desperately seeking to find his father and carry on his work to create the Doomsday Project, he came across the complex and released both his father and the Captain, 50 years after they were trapped.

With neither of them aged a day, they continued to battle and eventually, The Skull activated the Doomsday weapon and his son became Electro, God Of Electricity. 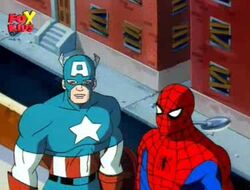 Spider-Man later called on Captain America to help him fight The Secret War alongside Iron Man, Black Cat, The Fantastic Four and Storm. After defeating the villains that The Beyonder placed on the planet, they returned to Earth as if nothing happened. 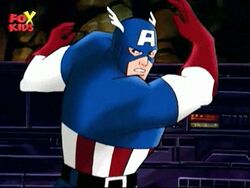 Cap sometime later again escaped the vortex and joined the Avengers. He would later help the new team of Avengers defeat his old enemy, Baron Zemo.

Captain America has no superhuman powers, although as a result of the Super-Soldier serum, he is transformed from a frail young man into a "perfect" specimen of human development and conditioning. Captain America's strength, endurance, agility, speed, reflexes, and durability are at the highest limits of natural human potential.

Captain America's most noticeable feature is his shield. He can not only use is to protect himself from incoming fire but as an offensive weapon. He can throw it with such keen accuracy that it can hit multiple targets and ricochet back to him.

Captain America was voiced by Lawrence Bayne on X-Men, David Hayter on Spider-Man, and Dan Chameroy on The Avengers: United They Stand. His appearances on Fantastic Four had no lines. He was briefly mentioned on Iron Man.

Will Meugniot was working on a series featuring Captain America. However, it was at the time Marvel Comics faced financial problems and went bankrupt. The series was stopped before it was fully produced, along with the cancellation of Spider-Man Unlimited, Silver Surfer, and The Avengers: United They Stand. It is unknown if this series would have been part of the Marvel Animated Universe.

Captain America was frozen in ice and was awaken in modern times. The time portal explanation was created by the producers of Spider-Man.

He was found by Namor who gave his body to the Avengers to wake. He was the first besides the original members (Iron Man, Ant-Man, Wasp, Thor, and Hulk) to join the team.

Retrieved from "https://marvelanimated.fandom.com/wiki/Captain_America?oldid=70720"
Community content is available under CC-BY-SA unless otherwise noted.