Calypso is the lover of Kraven the Hunter. 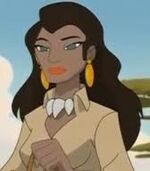 While in Africa, Calypso got pictures of Spider-Man from a mysterious friend who wanted Kraven the hunt him. She gave the pictures to Kraven and the two set off for New York City.

Calypso watched as Kraven tried but failed to either kill or capture the webslinger. She reveals that they were hired by the Master Planner. She then tells him to hunt in a pack.

Calypso was voiced by Angela Bryant.

Retrieved from "https://marvelanimated.fandom.com/wiki/Calypso_(The_Spectacular_Spider-Man)?oldid=35791"
Community content is available under CC-BY-SA unless otherwise noted.