Cable is a time traveling mutant, mercenary, and leader of X-Force. He spends much of his time trying to take down the evil mutant Apocalypse in the year 3999 AD.

Mister Sinister wanted to create a clone of Jean Grey and Scott Summers to help defeat Apocalypse. He had Rachel Summers bring them to their time using the Phoenix Force. Rachel made it seem as though she was helping the two X-Men fight Sinister but they discovered the truth. Sinister created the clone and that child grew up to become the man known as Cable.

Cable went back to the present and began working as a mercenary in the army of a general who called himself "The Leader". After finding out that the Leader wasn't interested in democracy as he had claimed to be, Cable left his army and went off on his own to start a revolution. Cable began hunting him and tracked the man down to Genosha.

While there he found that the mutants were forced into slave labor to build Master Mold. He freed Gambit who then freed everyone else. When asked who he was he sardonically called himself the "Wild Man of Borneo." While the former slaves were revolting against their captors, Cable found the Leader and took his arm and leg.

Later he went to find a scientist named Gottfried Adler, who had helped in the mutant slavery in Genosha by inventing deadly collars that suppressed mutant powers and after finding out that he was on Muir Island in Scotland, he set off to track him down, unaware that Adler had already been killed and a shapeshifter named Mystique had taken his place. After finally capturing Adler and finding out who he really was, he was defeated by the X-Men, but managed to make his escape possibly traveling back to his own time.

At some unknown point afterwards, Cable lost his arm and replaced it with a mechanical one from the future. He also fathered a child whom he named Tyler.

In the future, Cable fought tirelessly against Apocalypse, an ancient mutant who sought to control the world. However, something was going wrong with his timeline and it was being erased. He used his Artificial Intelligence to learn that Bishop, a time traveler from an earlier period, had gone back and changed the Techno-Virus. Therefore humanity did not develop proper immunity against other diseases so his past was disappearing. Unfortunately, the Techno-Virus was developed by Apocalypse, meaning Cable had to help his mortal enemy to save the world.

Cable went back and tried to kill Bishop, but was stopped by the X-Men. When the time came, Cable allowed Wolverine to be infected by the virus so his Healing Factor would develop the necessary antibodies. Upon returning to his time, he found that everything was as it was, though still in a war with Apocalypse.

Sometime later that same year, the timeline changed and Tyler became an adult. 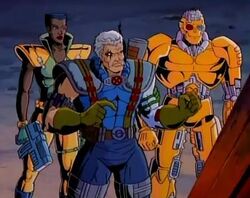 Tyler joined him on a mission to destroy the Lazarus Chamber, the secret to Apocalypse's long life. However, Apocalypse stole his time traveling device and used it to "escape" time so he could travel to any period he wanted.

Cable used another time travel device to go back and get the help of the X-Men, whose members Charles Xavier and Jean Grey were kidnapped by Mister Sinister. Cable and the X-Men were joined by Bishop and stopped Apocalypse's plan, apparently destroying him for good.

At one point he formed a group called X-Force consisting of himself, Bishop, Psylocke, Deadpool, Feral, Angel, Domino, and Lila Cheney. They helped save the X-Men when they were captured by Shadow King in the body of Cassandra Nova.

Cable's mutant power is telekinesis. He can move objects with his mind. 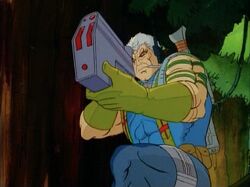 Being from the future, Cable has access to highly advanced weaponry including a time travel device, Artificial Intelligence and high tech such as rifles and grenades.

Cable is mostly a lone wolf character, even though he has his own team in the future. He does not appear to get along with anyone. Though he shows a lot of love for his son.

Cable was voiced by Lawrence Bayne in English and Tessho Genda in the Japanese dub.

When casting Cable, the producers had mind a voice like William Smith, Robert Mitchum, and Clint Eastwood.[1]

So far, the only animated version of the character though concept art of Cable was developed for the unproduced second season of Wolverine and the X-Men.

Cable's background was not explored in X-Men. He simply shows up and it is implied he already knows of Jean and Scott though not why. The backstory involving Mister Sinister, Rachel Summers, and X-Force did not occur until much later with the comic book continuation X-Men '92. The actual backstory belongs to a separate character named Nate Grey, also known as X-Man.

In season one Cable is shown to be simply a highly skilled mercenary. In season two and the rest of the series, he is suddenly a time traveler and has a cybernetic arm. Though the second version is more true to the comic book character, it is never explained how this happened in the series. There is a similar inconsistency with Angel.

Another inconsistency deals with Tyler. In two different multi-part episodes, both set in 3999, he appears as both a child and young adult. Though this could be due to the constantly changing nature of being in the future and these are alternate universe versions.

Cable's name is Nathan Christopher Charles Summers and he is the son of Scott Summers and the clone of Jean Grey named Madelyne Pryor. None of this is referenced in the series. Though it is alluded to when his A.I. is telling him about the X-Men and he seems to already know about Scott and Jean.

He carries a spear-like weapon called the Psi-Mitar. It focuses and amplifies his psychic powers creating powerful blasts.

The bionic left arm is specifically his own arm, unspecified in the series. It was consumed by the Techno-Organic Virus, present in his organism since his birth which is the entire reason why Cyclops was forced to send him to the future in the first place. Also, as a side effect of the virus, his left eye is constantly glowing, something which is not seen in the cartoon.

He also has telepathic abilities.

He leads a team of mutants called X-Force that has consisted of Cannonball, Boom Boom, Warpath, Shatterstar, Feral, and Copycat disguised as Domino. While this team wasn't seen in the series, it was included in X-Men '92.

He has an evil clone named Stryfe who was created by Apocalypse himself.

Tyler is a supervillain known as Genesis.

He has also partnered with Deadpool.

Retrieved from "https://marvelanimated.fandom.com/wiki/Cable?oldid=89541"
Community content is available under CC-BY-SA unless otherwise noted.