For other use of Blade, see Blade (Disambiguation).

Blade is the son of a vampire man and human woman. Shortly after his birth, the mother was turned into a vampire against her will. To spare him from the curse she was given, she gave him to an orphanage.

As Blade grew he began exhibiting various vampire-like tendencies without their weaknesses. He was eventually found by Whistler who taught him to control his abilities and hunt vampires.

Drawn to New York to track down the vampire that is plaguing Empire State University students, Blade encounters Spider-Man who he believes is the culprit. After discovering that his usual vampire weapons have no effect on the web-slinger, Blade reluctantly agrees that Spider-Man is not the vampire. When Spider-Man reveals that Morbius is the real vampire as well as the victim of a Neogenic Recombinator experiment gone awry, Blade decides to demolish the scientific equipment. Spider-Man must prevent the vampire hunter from destroying the Recombinator as well as Michael Morbius.

Blade and Spider-Man are forced to put their differences aside in an attempt to track down Morbius and stop him from transforming everyone into vampires like himself using the Neogenic Recombinator. When Lt. Terri Lee joins the chase, she falls for the moody vampire hunter in the process. Speaking of romance, Morbius kidnaps his ladylove Felicia Hardy in order to transform her into the first of many vampires. Just in time, Blade and Spider-Man discover Morbius' hideout and interrupt him long enough for Felicia to force him to face the truth, but it isn’t in time to save Morbius from his own mutation.

In Europe, Blade continues his fight and goes after the Vampire Queen, only to discover it's his mother, Miriam. She escapes to New York, where she tries to beguile the now revived Morbius into revealing his knowledge of the Neogenic Recombinator, which she wants to use to create more vampires, which she does by telling Blade that she wants to be normal. She succeeds in creating some vampire children, as she calls them, but Spider-Man, Black Cat, Morbius, and Blade, who’s been convinced to fight his mother by Detective Lee, stop her. In the end, Miriam escapes, and Black Cat and Morbius join Blade on his quest. 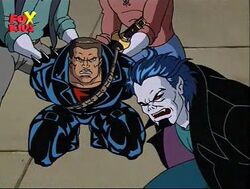 Spider-Man summons the Black Cat from earth, using a machine that he, Iron Man, and Lizard were able to hotwire. She is really angry at being kidnapped since she, Morbius, and Blade nearly had Miriam captured. Despite her anger at being kidnapped, she decides to help him fight the villains on the alien planet. Blade and Morbius appear at the end, somehow knowing that Black Cat will return safely.

Blade was the favorite superhero of Spider-Man story editor John Semper, Jr.. Semper claims that him including Blade on the series brought the character to the attention of Avi Arad eventually leading to the first Blade film. The film began being developed along with Blade's introductory episodes. David S. Goyer created Whistler for the film but the series got to use him first.

Blade's mother was a prostitute named Tara who was given birth in a whorehouse in London. When she experienced labor complications a doctor was called, but a vampire came. The vampire bit Tara as she gave birth thus passing part of the vampirism to him. The other prostitutes drove the vampire off before he could kill the newborn.

His real name is Eric Brooks.

He was originally introduced as a foe to Count Dracula, who in the series is simply a fictional character. It wasn't until the continuation of X-Men, X-Men '92, that the "real" version of Dracula was introduced.