Natasha Romanoff, also known as Black Widow, is a member of S.H.I.E.L.D. and Avengers. 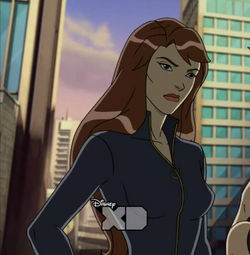 Black Widow joined the Avengers along with Iron Man, Thor, Captain America, Hulk, and Hawkeye. With the seeming death of Captain America at the hands of Red Skull, she was called to serve with the group again to stop him by Iron Man. Instead of joining the others aboard the Quinjet and being reunited with her teammates publicly, she stuck to the shadows and tried to see if they needed her. Once the group was placed in harm's way following what she referred to as bad leadership by Iron Man, she helped them and explained why she had not joined them initially. With Iron Man confirming her theory that Captain America was deceased, she told him to make sure that he lost no more friends that day and start leading the group. Iron Man had his armor extracted from M.O.D.O.K. and put on Red Skull, which Black Widow and the other Avengers tried to prevent.

Once leaving the place with the rest of the Avengers, she quickly contributed to trying to save Iron Man, though it was hampered by the group's means of transportation being destroyed by M.O.D.O.K. while they were confronting Red Skull and the rest of his soldiers. The team instead used her jet to get to the Avengers Mansion, where Black Widow was relieved to see him well adjusted. However, Tony soon made it clear that he wished to disband the Avengers once again, which Black Widow referred to as the it's not you, it's me speech. She and the rest of the team were flabbergasted by his decision and scattered across the mansion. She began to talk to Hawkeye before being attacked by the nanobots that M.O.D.O.K. had sent their way, which resulted in her and the rest of the Avengers beginning to fight while under their influence. Once Iron Man restored her and the others, she confirmed to Hawkeye that they were under mind control and stressed her belief that something was wrong with him.

She was captured by the Collector sometime afterwards, alongside the other Avengers. This caused Iron Man to team up with Hulk to save her and the rest of the group.

Black Widow does not waste her time trying to be anyone's friend, instead she wasted her time trying to get away from those on her team. The Avengers knew how she acted and how she was, so it was no surprise to anyone that she chose to not immediately regroup with the rest of the team once Iron Man initially called them to arms. She treated what was supposed to be a welcoming between old comrades like a secret mission that was testing her, evidenced by her recording she made while watching the Quinjet leave the Avengers Mansion. Once she noticed the group being easily battered by the agents of Red Skull, some narcissism of hers contributed to her willingness to get involved and caused her to help the rest of the group, which she dismissed as wanting to make sure that they needed her.

Retrieved from "https://marvelanimated.fandom.com/wiki/Black_Widow_(Marvel_Universe)?oldid=65239"
Community content is available under CC-BY-SA unless otherwise noted.