T'Challa is the king of the African nation of Wakanda. He is also their protecter as the superhero Black Panther. He was also a member of the Avengers.

T'Challa was the prince of Wakanda when his father, T'Chaka, was killed by Klaw. He became king and took on the mantle of Black Panther.

However, he realized he could not defeat Klaw on his own. He sought out the Fantastic Four and lured them to Wakanda. He fought them seeing that they were all capable warriors. He explained himself and got their help. Together the five of them brought down Klaw. 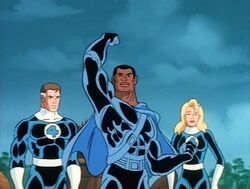 At some point he joined the Avengers but left. His portrait was in a hall along with several other notable members such as Captain America, Iron Man, and Thor. Some time after, he assisted the Avengers led by Ant-Man. 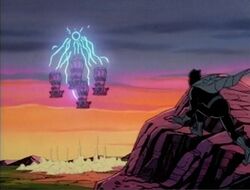 When Magneto told the world about Asteroid M, he took mutants away in Africa. The X-Men came there to meet him and come along. Black Panther crouched on a nearby rock and watched them take off.

Black Panther was voiced by Keith David. David said of the role, "I just wanted to bring the most authenticity to it as I possibly could and the most excitement about it, because I wanted it to flourish and continue."

First version of the character outside the comics. Black Panther appeared on Spider-Man and His Amazing Friends, but only as a costume in a store. Larry Houston animated him into the Spider-Man and X-Men series before writing him into Fantastic Four.[1] 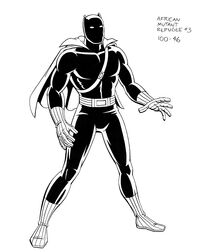 For his on "Sanctuary, Part One", Larry Houston listed Black Panther in the script as "African Mutant Refugee #3" in order to keep the "suits" unaware that the character was appearing in a cameo.[2]

Houston said, "We had two X-Men episodes in Africa, one with Storm's mutant godchild and the other with Magneto gathering up mutants to take them to his mutant sanctuary Asteroid M. I was able to include the Black Panther into the show whenever they were in Africa, which some sharp-eyed fans were able to spot." He added, "I couldn't give him a speaking part, but it was a great opportunity."

Artist Mark Lewis designed the character based on the Jack Kirby design. Lewis said, "Of course, I didn't do a dead-on Kirby impression, because that wouldn't have fit stylistically into the look of the X-Men cartoon. But I did at least try to get some of that Kirby feel in his hands and some of the masses of his body."

Director and producer Larry Houston intended for "Prey of the Black Panther" to be a backdoor pilot for a Black Panther series he hoped to make. He previously included Black Panther in the X-Men episode "Sanctuary, Part One" as part of this plan.

Houston wanted to use the episode to launch a Black Panther series. He said, "The more inquiries I made about it becoming a regular series, it'd just keep getting put off and put off." He added, "The promise of doing the first animated Black Panther was one of the reasons I left directing the last year of the X-Men series." Houston had wanted to adapt Fantastic Four issues 52 and 53 into the series, which became the basis for "Prey of the Black Panther". Houston said of the 2018 live-action film, "I am...so glad to have lived long enough to see the comic book I bought off a spinner rack in 1966, as a child, to now see the Black Panther, and all of my other childhood heroes, on the big movie screen. And done right."

David was onboard for a series saying, "I had great hopes at that time that maybe they'll make this a series and I'll get to be in it. One of the things that manifested was that the proverbial 'they' weren't ready for it to be any more than it was. Because the more inquiries I made about it becoming a regular series, it'd just keep getting put off and put off. 'Oh, it's being thought about. It's being thought about." David said that he is as proud of Black Panther as he is of anything else and has no bad feelings at not getting to play the part regularly. He said, "There's a lot of economics involved. There's a lot of socio-ethnic politics involved. And now with the opening that we've had, it was taken full advantage of, which is a great thing. You can't cry about the past and what didn’t happen. I'm more interested in celebrating what is happening."[3]

He became a member of the the Fantastic Four.

He met Ororo Munroe when they were young. When they grew up he married her.