Bill Clinton was President of the United States of America. 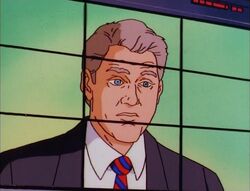 He asked Force Works for help.

Thing admitted that he did not vote for Clinton but still likes the job that he's doing.

When the Fantastic Four began attacking various places, Clinton was forced to order that they be brought in and arrested. The United States Navy found them at the Bay of Fundy and took them to prison. They escaped and got out of trouble because it was alien shapeshifters called Skrulls that actually did the attacks while the team had been called away by a Skrull imitating Clinton.

Bill Clinton was voiced by Jim Cummings in all of his appearances.

Clinton was the real President at the time of production.

It is unknown just when Clinton is meant to be president in the timeline of the Marvel Animated Universe when considering the Unnamed Female President and Robert Kelly. Likely he came before those two.

The unnamed female president of X-Men bears a striking resemblance to the real Clinton's wife Hillary Rodham Clinton. The show started in 1992, the same year Bill won the election. In 2008 and 2016, Mrs. Clinton would also run for president.

Retrieved from "https://marvelanimated.fandom.com/wiki/Bill_Clinton?oldid=64840"
Community content is available under CC-BY-SA unless otherwise noted.