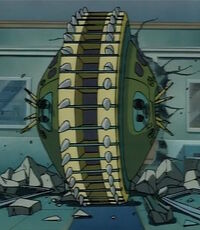 Weele was head of a band of high-tech thieves. They built a large powerful wheel that Weele piloted while the others used jetpacks. Weele, as Big Wheel, used the vehicle to break into places while the others would rob the place. Their efforts eventually caught the attention of the superhero Spider-Man.

After a successful robbery, the group met at their underground base. Weele was berated for using the money to buy elaborate jewelry. They then found a young boy in their base who was stealing their technology. Weele and the others chased after him but lost the boy.

As they committed another robbery, they were confronted by Spider-Man and the boy, going under the name Rocket Racer and using his technology. Big Wheel chased Rocket Racer to get his technology back. Eventually he was defeated by a combination of the two.

The producers changed Big Wheel from a vengeful former business man to a petty criminal likely to make Rocket Racer more sympathetic, since he went from petty crook who tortured Weele to inner-city kid struggling to survive.

So far, this is the only animated version of the character.

His real name is Axel Weele, a pun on the car part, and he legally changed it to Jackson.

Weele got the Big Wheel from Tinkerer. But because of his inexperience with the Wheel he fell off a rooftop and into the Hudson River. Spider-Man assumed he had died. It was revealed twenty years later, and after Spider-Man ended, that he had survived.

Retrieved from "https://marvelanimated.fandom.com/wiki/Big_Wheel?oldid=64392"
Community content is available under CC-BY-SA unless otherwise noted.