The Beyonder is an entity of great power, responsible for the Secret Wars. He is the master of Spider-Man's trainer, Madame Web.

In one reality, there are two Spider-Men. One is a clone but neither knows which. One changed his name to Ben Reilly and became Scarlet Spider. The other became angry and depressed when Dr. Curt Connors thought that Ben was the real Peter and the other was the clone. He attacked Scarlet Spider then bonded with a Carnage symbiote to become the villainous Spider-Carnage.

He teamed up with Green Goblin, Hobgoblin, Kingpin, and Alistair Smythe. He wanted to destroy not only his reality but all others as well.

It work, but when it reached the dimension of Beyonder and Madame Web they reversed time and went to train various Spider-Men from different universe. 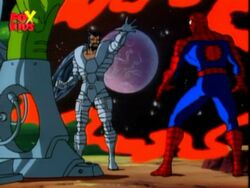 He put Spider-Man to the test with the Secret Wars. He went to a world and put various figures of evil on the planet: Doctor Octopus, Doctor Doom, Alistair Smythe, Lizard, and Red Skull. He sped time up one year then put Spider-Man on the planet with a machine to bring various heroes. He brought Iron Man, Captain America, Storm, the Fantastic Four, and Black Cat to the planet. They also managed to subdue Lizard and bring out the Curt Connors personality.

The heroes stopped Doctor Octopus, Red Skull, and Alistair Smythe. However, Doom built a device that could steal the powers of the Beyonder. Unfortunately for him, when he slept his dreams came to life. Spider-Man convinced him to give up the powers.

Afterwards, Spider-Man realized that Doom never really stole the powers but Beyonder made him think he did. He returned all the heroes and villains to Earth with no memory of what happened except for Spider-Man.

Beyonder took him to Spider-Carnage's dimension where he met his symbiote-powered alternate self, Scarlet Spider, and the rest of the Spider-Men. He put this Spider-Man in charge, told him of what happened, and sent them to defeat the villain. When the six-armed Spider-Man became Man-Spider, Beyonder used the rest of his powers to teleport him to his own dimension.

Eventually, Spider-Carnage was convinced to sacrifice himself by an alternate version of his Uncle Ben.

Beyonder was voiced by Earl Boen.

In the comics he is clean-shaven. In the series he was given a goatee.

He is supposedly the sum total of the entire Multiverse, called the Beyond-Realm. Hence his name. Originally he was supposed to be the most powerful being in the entire Marvel Universe.

The Secret War was simply because Beyonder wanted to see a never-ending battle between good and evil, and not a test for any one individual.

After the first Secret War, Beyonder came to Earth and took human form to walk among them and learn about them. He based his form off of Captain America. This period became known as Secret war II. During this time he cured Daredevil's blindness, who then made Beyonder change him back.