Baron Mordo is a master of the dark mystical arts, ally to Dormammu, and archenemy of Doctor Strange. He briefly used the alias Ardon Broom, an anagram of his name.

Baron Mordo mastered the black arts, and used them to betray his teacher, The Ancient One. His attack was stopped when Stephen Strange attempted to warn the Ancient One. Although Strange did not succeed in warning him, the Ancient One knew of Mordo's evil plan and stopped it. Knowing that his plans had failed, he fled and began studying the dark magics.

He used his knowledge of the black arts to fight Doctor Strange, and attempted to free Dormammu from his own dimension to feed on ours before Spider-Man, Wong, and Doctor Strange stopped him. He ran the center for reunification, tricking people into believing they could be reunited with their lost loved ones. 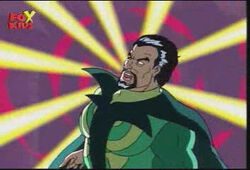 He broke into Stark Enterprises' computer system and re-programmed the John Jameson Space Probe, which carried the Venom Symbiote to come back to Earth. Mordo hypnotized the symbiote's new host into giving it back to Eddie Brock, its previous host.

Mordo escaped when Spider-Man, Iron Man, and Venom attacked his lair and trapped his master, Dormammu, along with Carnage and Venom in an alternate dimension.

His alias, Ardon Broom, is original to the series.

His name was Karl Mordo.

Retrieved from "https://marvelanimated.fandom.com/wiki/Baron_Mordo?oldid=89882"
Community content is available under CC-BY-SA unless otherwise noted.