Bait 'n' Switch is a short film. In it, Rocket Raccoon rescues Groot from the Collector.

Hundreds of holding cells sit in a large, dark room. A butterfly flaps its wings in one. A cocoon lies in wait in another.

In one cell, the miniaturized Groot looks downtrodden as he sits in a pot alone in the cell and sighs.

Suddenly, Rocket Raccoon pops up and looks at him laughing. Groot spots him and becomes excited. Groot bounces over to him and waves.

Just then, Collector appears on the other side of the cell scowling. Rocket looks shocked and runs away. Collector runs around the cell to follow. Groot watches him go.

Rocket runs between the cells and Collector follows. He tries to lose his pursuer but Collector stays on his tail.

Rocket leaps behind a cell holding a jellyfish and pauses. He hears Collector run by on the other side. He peaks around the side and heads back.

Rocket runs as fast as he can but is not moving. He looks around then behind him to see Collector holding his tail. He stops then slams his foot down on Collector's.

Collector screams and grabs his foot, bouncing up and down, as Rocket gets away. Rocket runs through the cells but is stopped by a wall.

He looks around for a way out then turns to see Collector approaching him. Rocket backs into the wall. He reaches behind him and pulls out a golden cube.

Collector looks at it shocked and moves in to examine it. Rocket throws it up into the air and Collector watches it go.

Seizing the opportunity, Rocket leaps through Collector's legs. Collector catches the cube and examines it.

Rocket runs back to Groot's cell and examines the cell. Groot bounces over to him.

Collector looks at the cube then tries to open it. He struggles and the top pops off revealing a Star-Lord doll on a spring. He realizes the distraction and turns back towards Rocket.

He throws the cube on the ground and runs back to Groot's cell. He stops near the cell and finds Groot still inside. He pulls Groot out and hugs it.

Groot falls over as it is a fake doll. Collector looks down at it as one of the eyes falls off. He shakes it in anger and the other eye falls off.

Collector throws the fake doll onto the ground smashing the pot. He leaps up and down in a tantrum then kicks the doll.

Rocket and the real Groot watch laughing. Rocket holds up his fist and Groot bumps it.

Marvel Entertainment and Funko collaborated to bring a series of short films with this one being the second after Spellbound.

Funko Director of Marketing Mark Robben said "We hope fans enjoy these short films as much as they do collecting Pop!, and hopefully we’ll be able to create many more."[2] 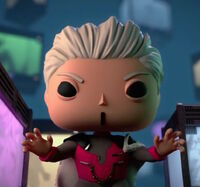 The concept of this short is based on a scene in the Guardians of the Galaxy film. In it, Collector asks if he can have Groot's remains after he dies. While Groot apparently dies, he survives in a smaller form. This short follows if Collector had taken that smaller form as they had discussed earlier.

The logo and look of the characters are designed after the versions seen in Marvel Cinematic Universe. 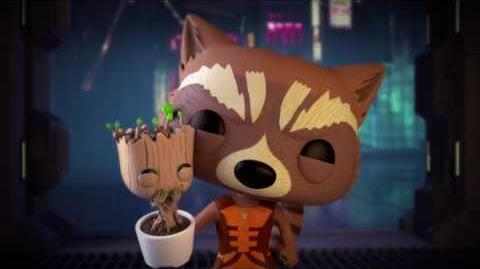