For other uses of Avengers, see Avengers (Disambiguation).

The Avengers were a team of superheroes whose roster changed greatly over the years. 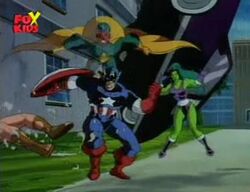 A new team of Avengers was reassembled by Ant-Man after the previous team broke up because of Loki’s mischief. This new team was the main characters in The Avengers: United They Stand. 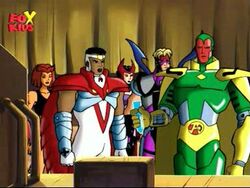 The series featured a team broadly based on the roster for the 1984 Avengers spin-off series The West Coast Avengers, comprised of the Wasp, Wonder Man, Tigra, Hawkeye, Quicksilver and Scarlet Witch (Hawkeye, and Scarlet Witch were also both in the Iron Man animated series as members of Force Works), led by Ant-Man (aka Giant-Man), with the Falcon and the Vision joining in the opening two-parter. 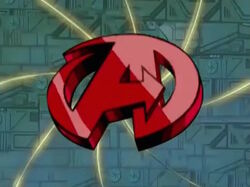 The series featured many of the Avengers' major comic book foes, including Ultron, Kang the Conqueror, Egghead, the Masters of Evil, the Grim Reaper and the Zodiac, as well as associated characters such as the Swordsman, the Circus of Crime, Namor, Attuma, Agatha Harkness and the Salem's Seven. The show made several fan-friendly references to aspects of the characters' comic book history that were otherwise not expanded upon for the uninitiated, such as the Falcon and Captain America's partnership, Hawkeye's partial deafness or Namor's half-breed nature.

In the alternate Age of Apocalypse timeline, a group of Avengers hunted down that world's X-Men. 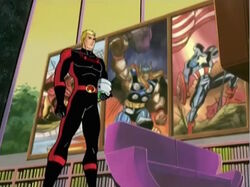 The version seen in The Avengers: United They Stand is loosely based on the West Coast Avengers.

The exact roster and timeline is difficult to determine in the Marvel Animated Universe. For example, Vision's origins are shown in The Avengers: United They Stand but a member in Fantastic Four led by Captain America who by the time of Avengers is no longer a member.

Thor is the only member of the "Big Three", the others being Captain America and Iron Man, to not appear in the series himself outside of portraits and the opening titles.

Hulk was also a founding member. Captain America was the first recruited after his frozen body was found by Namor.

Wonder Man was originally a villain to the Avengers.

At one point, everyone but Captain America resigned. He was joined by Hawkeye, Scarlet Witch, and Quicksilver.

Spider-Man was offered a position on the team but turned it down. He was offered membership again but was turned down due to security concerns by the team's government liaison.

The Avengers were involved in the Kree-Skrull War.

Beast was a member when Jean Grey became Phoenix. He rejoined the X-Men briefly to help them during this time.

Henry Peter Gyrich was the Avengers' liaison to the United Nations. Due to his anti-superhuman stance, he forced the team to comply to strict government regulations and forced the team to only seven members. He made them include Falcon to comply with affirmative action forcing Hawkeye off the team. Falcon was unhappy with this and resigned, allowing Wonder Man to join.

The Avengers helped restore Ms. Marvel's memories that were taken by Rogue.

The West Coast Avengers were eventually disbanded and Iron Man formed Force Works from this.