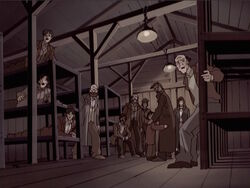 At one point, a young boy was held in the camps by the name of Erik Lehnsherr.

Towards the end of the war, the camp was liberated thanks to the efforts of Captain America and Logan. During their escape, Lehnsherr used his developing mutant powers to save the two heroes from a grenade.

In actuality, and in the comics, Auschwitz was liberated by the Soviet Union army.

Retrieved from "https://marvelanimated.fandom.com/wiki/Auschwitz_Concentration_Camp_(X-Men:_Evolution)?oldid=46393"
Community content is available under CC-BY-SA unless otherwise noted.