Archangel is from the Yost Universe series Wolverine and the X-Men.

Warren Worthington III is a mutant. While with the X-Men he was a superhero using the name Angel. However, he later became one of the Horsemen of Apocalypse under the name Archangel. 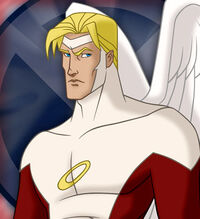 Shortly after Scott Summers was added to the X-Men, Warren joined the team. He partook in several exercises in the Danger Room with Cyclops, Iceman and Beast. He once laughed at Cyclops after he was soaked during their training. He faced off against Magneto with Cyclops, Beast and Iceman while Jean stayed in the Blackbird. He was easily defeated by Magneto and was later saved by the combined forces of Jean and Scott.

He stayed on the team for a number of years, meeting and developing a close relationship with Storm, gaining a tolerance of Wolverine and continuing to work alongside older members such as Beast and Cyclops until an explosion at the mansion caused the X-Men to disband. Though Warren was not present, he heard of the team's disbandment and went on with the rest of his life. It is unknown how he felt about no longer being an X-Men.

Sometime later, after flying with Storm, Warren had an accident that resulted in badly damaged wings. His father ordered the wings removed, further estranging the relationship between father and son. Angel did not take this well at all. Mr. Sinister saw this as an opportunity to capture one of the X-Men, and Angel went along with it, in the hope to regain his wings.

After the transformation into Archangel, he attacked Worthington labs, seeking vengeance on his father. The X-Men soon intervened, and he was knocked out by one of Storm's lightning bolts- though, Storm took no joy in doing that. Mysteriously though, he disappeared after a brief distraction.

Archangel was voiced by Liam O'Brien.

Angel's apparent relationship with Storm is derived from his Ultimate version. 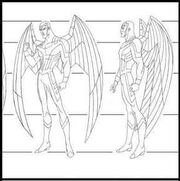 Concept art created for the proposed second season of Wolverine and the X-Men shows his Age of Apocalypse version.

Retrieved from "https://marvelanimated.fandom.com/wiki/Archangel_(Yost_Universe)?oldid=67185"
Community content is available under CC-BY-SA unless otherwise noted.