Anna Watson is the aunt of Mary Jane Watson, through her brother, and friend to May Parker.

She set up Mary Jane on a date with May's nephew Peter Parker, though she later did not approve him. She blamed Peter when Baron Mordo kidnapped her and when she disappeared because of the Green Goblin. She was crying at Mary Jane's grave when the Punisher decided to help her. He followed Peter, captured Harry, and found her. She did approve of Mary Jane's fiance Harry Osborn and was saddened when they broke up. 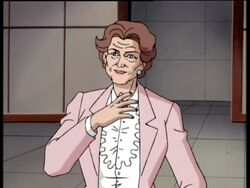 In an alternate universe, Anna was quite fond of Peter Parker, whose dual-identities were known to the world. At a party hosted by Parker and his fiance Gwen Stacy, Anna caught her niece Mary Jane kissing Peter. She was delighted that he showed interest in Mary Jane.

First adaptation of the character.