Warren was one of the original members of the X-Men along with Beast, Cyclops, Iceman, and Jean Grey. He left the team for unknown reasons. 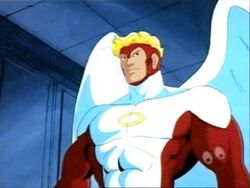 He hated being a mutant, so much so that he funded the research of a scientist who claimed he could "cure" mutants. After the treatment was ready, Warren underwent the surgery. Unfortunately, Dr. Adler was Mystique in disguise, who was working for Apocalypse. The operation didn't cure Worthington, instead turning his soft feather wings into cold, hard steel. He became one of the Four Horseman along with War, Famine and Pestilence. 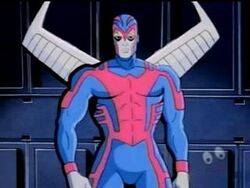 The X-Men defeated the Horsemen and Rogue absorbed the evil from Archangel. Feeling nothing but hatred for what Apocalypse had turned him into, Angel became obsessed with ridding the world of his former master and spent his millions hoping to learn the secret of how to defeat him.

Apocalypse tricked Angel into believing that piercing a certain spot on the back of his neck could defeat him, hoping to finally rid himself of his former Horseman. The X-Men intervened in the battle and almost defeated Apocalypse, but Angel vowed he would not rest until he the day he kills the man who took away his feathered wings.

Angel was voiced by Stephen Ouimette.

First version outside the comics to become Archangel.

He eventually got his feathered wings back, but still retained his blue skin color.