Andrew's TV is a business that specializes in televisions.

Little is known about the history of the store. They would have television sets in their windows tuned to various channels so that passersby could watch. 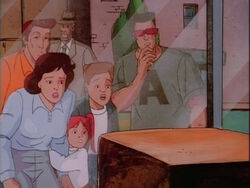 One day, the president of the United States of America made a public announcement. She revealed that mutants had attacked the Federal Security Agency. She explained the attacked was stopped by robot policemen called Sentinels. People stood outside the store to watch this broadcast.

The store is original to the episode.

Retrieved from "https://marvelanimated.fandom.com/wiki/Andrew%27s_TV?oldid=65860"
Community content is available under CC-BY-SA unless otherwise noted.