Andre Cocteau was a double-agent for the Allies during World War II.

Before the war he had a daughter named Justine Cocteau who would own the Ferme Bakery and worked with the French Resistance. While loyal to them, he worked for the Nazis, more specifically the Red Skull. He worked out of the Chateau du Mort near Paris, France. He built the Sleeper robot for Red Skull. Logan and Captain America were sent on a mission to rescue him, as were the Howling Commandos. However, he seemingly betrayed them to Red Skull. Though Andre and Red Skull got away, the Chateau was destroyed. 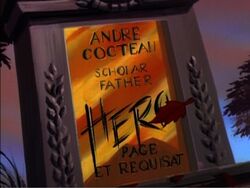 Over the course of the war, Andre sabotaged the Nazi's research on V2 Rockets and the atomic bomb. He eventually died and was buried in a cemetery overlooking the Eiffel Tower. Logan found him, wanting to kill him for fifty years. Justine told Logan the truth about her father and Logan forgave him, carving "HERO" into his tombstone.

Andre Cocteau was voiced by an unknown actor.

Andre and his daughter were created for the episode.

Retrieved from "https://marvelanimated.fandom.com/wiki/Andre_Cocteau?oldid=66280"
Community content is available under CC-BY-SA unless otherwise noted.