Age of Apocalypse is from the Yost Universe series Wolverine and the X-Men.

The Age of Apocalypse is an alternate timeline formed after the Days of Future Past was erased. It is ruled over by the powerful mutant known as Apocalypse.

Little is known about this possible timeline. Apocalypse rules the world along with Mister Sinister and apparenly Cyclops.

Charles Xavier used Cerebro to warn Wolverine and the X-Men of the threat, much as he did in the Sentinel-run future.

It was stated that if Wolverine and the X-Men went on for a second season the focus would have shifted to stopping this timeline. 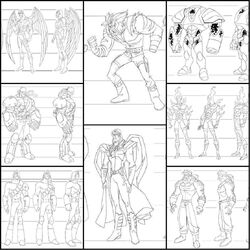 Concept art was created for the Age of Apocalypse versions of Archangel, Wolverine, Holocaust, Colossus, Sunfire, Cyclops, Magneto, and Sabretooth.

The timeline was formed when Xavier's son, Legion, tried to kill Magneto but ended up killing his father.

Heroes such as the Avengers, Fantastic Four, and Spider-Man never appeared and thus Apocalypse had no major threat.

Retrieved from "https://marvelanimated.fandom.com/wiki/Age_of_Apocalypse_(Yost_Universe)?oldid=67183"
Community content is available under CC-BY-SA unless otherwise noted.