Carl "Crusher" Creel, also known as Absorbing Man, is supervillain crime enforcer and member of the Masters of Evil.

At some point, Absorbing Man was employed by Miss Allure, a criminal with the power to hypnotize people. Absorbing Man fell in love of Allure, but she showed no interest in return. When Allure's powers began to causing her headaches, she hypnotized Bruce Banner in order to having him develope a cure for her, but the jealous Absorbing Man tried to kill Banner. Banner survived by transforming into the Grey Hulk. When Absorbing Man recaptured Banner, he had recovered from Allure's power, but faked to be still hypnotized in order to create a machine which removed not only Allure's headaches, but her power as well. The now powerless Allure accepted the love of Absorbing Man just before being both sent to prison. 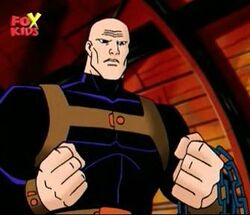 Some time later, Absorbing Man joined the Masters of Evil and fought the Avengers.

Absorbing Man was voiced by Jim Cummings on The Incredible Hulk and Oliver Becker on The Avengers: United They Stand.

Is primarily an enemy of Thor.

Retrieved from "https://marvelanimated.fandom.com/wiki/Absorbing_Man?oldid=46893"
Community content is available under CC-BY-SA unless otherwise noted.