Abomination is a gamma-powered supervillain. He works for Leader and has a strong rivalry with the Hulk.

Nothing is known about the early life of Abomination, and his real name is unknown.

Because they are both incredibly powerful, Abomination developed a strong grudge against Hulk but was always defeated.

At some point the Leader placed Abomination under his mental control and forced him to serve him. Later, however, Abomination served him willingly, without mind controlling.

Initially Abomination had apparently trouble with speaking but later he was able to talk clearly. 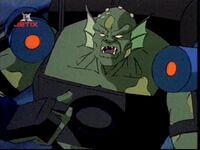 While in Detroit, Gargoyle developed a gamma-based virus. While regular humans were infected, Abomination and Gargoyle began losing their powers. Abomination required a special harness, which he hated, to maintain his strength. Eventually, Bruce Banner cured the virus and Abomination was restored. He fought Hulk but was confronted by Thor and defeated.

Abomination was voiced by Kevin Schon in his first appearance and Richard Moll in all subsequent appearances.

His real name is Emil Blonsky.

He was always able to talk clearly.

Retrieved from "https://marvelanimated.fandom.com/wiki/Abomination?oldid=71782"
Community content is available under CC-BY-SA unless otherwise noted.